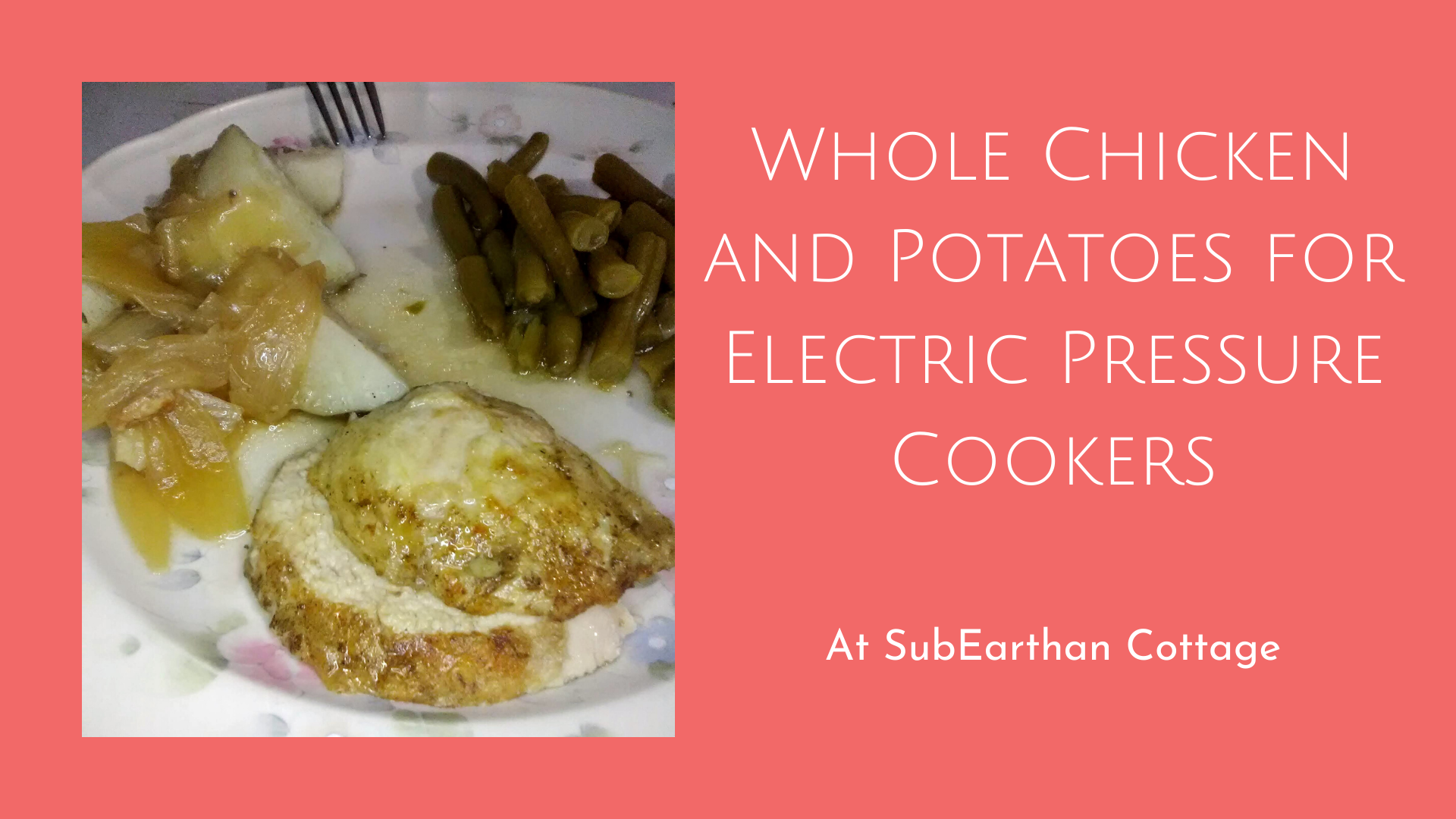 Whole chickens are inexpensive, frugal type of meat. They provide easy leftover meals, and you can use the bones to make homemade broth for soups and to flavor other meals. While you can cook a whole chicken in an Instant Pot or other electric pressure cooker (this is the type I have) just by seasoning it and adding it to the pot with liquid, a few extra steps will add even more flavor to the final result.

I like to keep the seasonings fairly neutral so that I can get creative with the leftovers. My family often gets bored with multiple meals of chicken and vegetables. If I use some of the chicken for chicken tacos for the next meal and chicken soup with the rest, it makes it less monotonous.

In this recipe, to keep it neutral I use salt, pepper and poultry seasoning to flavor the chicken. It’s easy to adapt the seasonings for a different twist. Cumin, chili pepper and cayenne pepper work well for making chicken chili, tacos or tortilla soup with the leftovers. Garlic, ginger and orange zest work well for making leftover chicken stir-fry. Get creative with the flavors you like.

You can also leave out the potatoes or swap them out for other hardy vegetables. Root vegetables hold up the best with the longer cooking time the chicken requires. Sweet potatoes, carrots and parsnips are some possibilities.

One neat feature on most electric pressure cookers is the ability to use them as a slow cooker. If you’d rather slow cook your whole chicken, follow the steps through step 11. Instead of locking the lid and setting it to cook under high pressure, keep the lid in the venting position and select the slow cook setting. You will want to cook the chicken for about 3-4 hours on “high” slow cook or 6-7 hours on “normal” slow cook, which is the equivalent of “low” on a traditional slow cooker. I do recommend double-checking the instructions for the slow cook setting on your pressure cooker, as there may be some variations.

I like to keep the seasonings fairly neutral so that I can get creative with the leftovers without worrying about seasonings clashing. In addition to potatoes, other root vegetables such as carrots can be used.

This post contains affiliate links. If you click through any of the Amazon links and make a purchase, I will receive a small commission. There is no added cost to you.

In the interest of being totally transparent regarding the things I recommend, I think it’s only fair that I post an update to my Why I Love my Electric Pressure Cooker, aka Knockoff Instant Pot post.

My first GoWise electric pressure cooker worked beautifully for almost a year and a half. Then, one day while mid-cooking cycle it just died. There was no warning, no error codes, no lights on, nothing. I gave it time to cool off to make sure it hadn’t overheated, but still nothing. Luckily, when my parents bought it for me as a Christmas present, purchased the extended warranty, so I was able to ship the broken pressure cooker back in exchange for an Amazon gift card.

Even though my first GoWise electric pressure cooker broke, I chose to repurchase the same model. I also bought the extended warranty. Until it died, I hadn’t had any trouble whatsoever, even with almost daily use, so I thought it was worth giving it another try.

After almost a year, my second GoWise electric pressure died in exactly the same way as my first one. I do use my electric pressure cooker almost daily, so I might be legitimately wearing them out. I did, however, have a friend say her GoWise died in the same manner. Because it’s a common malfunction, this time I planned to pay the little bit more and get an Instant Pot.

Unfortunately, because it lasted less than a year, the manufacturer’s warranty still covered my second GoWise. That means my extended warranty won’t cover it yet. Since the manufacturer’s warranty covers an exact replacement, I’m expecting my third GoWise electric pressure cooker in the mail. I’m sure it will still be awesome for about a year, and maybe the third time is a charm.

In the meantime, I’ve actually been considering getting a second electric pressure cooker so I can have one for the main dish and sides. I like how rice turns out in the pressure cooker compared to other rice cookers, and I frequently burn it on the stove top. Having two would work nicely for when I’m making beans or curry in the pressure cooker and need rice to go along. If I find a good deal on an Instant Pot, I may go ahead and splurge on it as my second. That way, I’ll have a backup in case this GoWise breaks mid-cooking and I can do a real comparison of the two.