‘This is a breast cancer and treatment post. If you don’t want to read about medical stuff, check out some of my DIYs and recipes.

I actually started this post about a week and a half ago on my last chemotherapy day. Then, I got tired, then sick a few days later and got to stress over whether I needed to go to the hospital. Luckily, all I needed was rest, antibiotics and my mom for a few days.

Today is my last chemotherapy treatment. I had an MRI done a week ago that shows all the previously affected lymph nodes to look completely normal. As for the three tumors in my breast, all that remains is wispy asymmetry in a benign pattern. “Wispy asymmetry” almost makes it sound pretty. Almost.

I’m still having a double mastectomy in June. The cancer was so diffuse and since I’m young, we’re not taking chances. It’s kind of funny how relative age is. When I was pregnant at thirty five, I was of “advanced maternal age” and it was considered a “geriatric” pregnancy. Get breast cancer at forty one and I’m young again, lol.

The chemo has made it so I won’t lose as many lymph nodes, so that is great news. Fewer lymph nodes removed means less chance of lymphedema.

Pathology from the surgery will determine if radiation is needed and if I will continue on the Herceptin and Perjeta or switch to a different targeted therapy. I’d really like to avoid radiation, if possible. For some reason, I’m more worried about radiation than chemo and surgery.

I am looking forward to having hair again. It will be nice not having to wash my hair while recovering from surgery, and being bald in summer isn’t terrible. I’m over tying scarves or wearing my wig, though, and as it gets hotter, both are uncomfortable. I need some hair to keep my scalp from getting sunburned.

I did make myself a couple of bucket hats that are easy to throw on. They turned out nicely, so I made a couple more to put in my shop. Right now, this is the only print, and I only have two available. 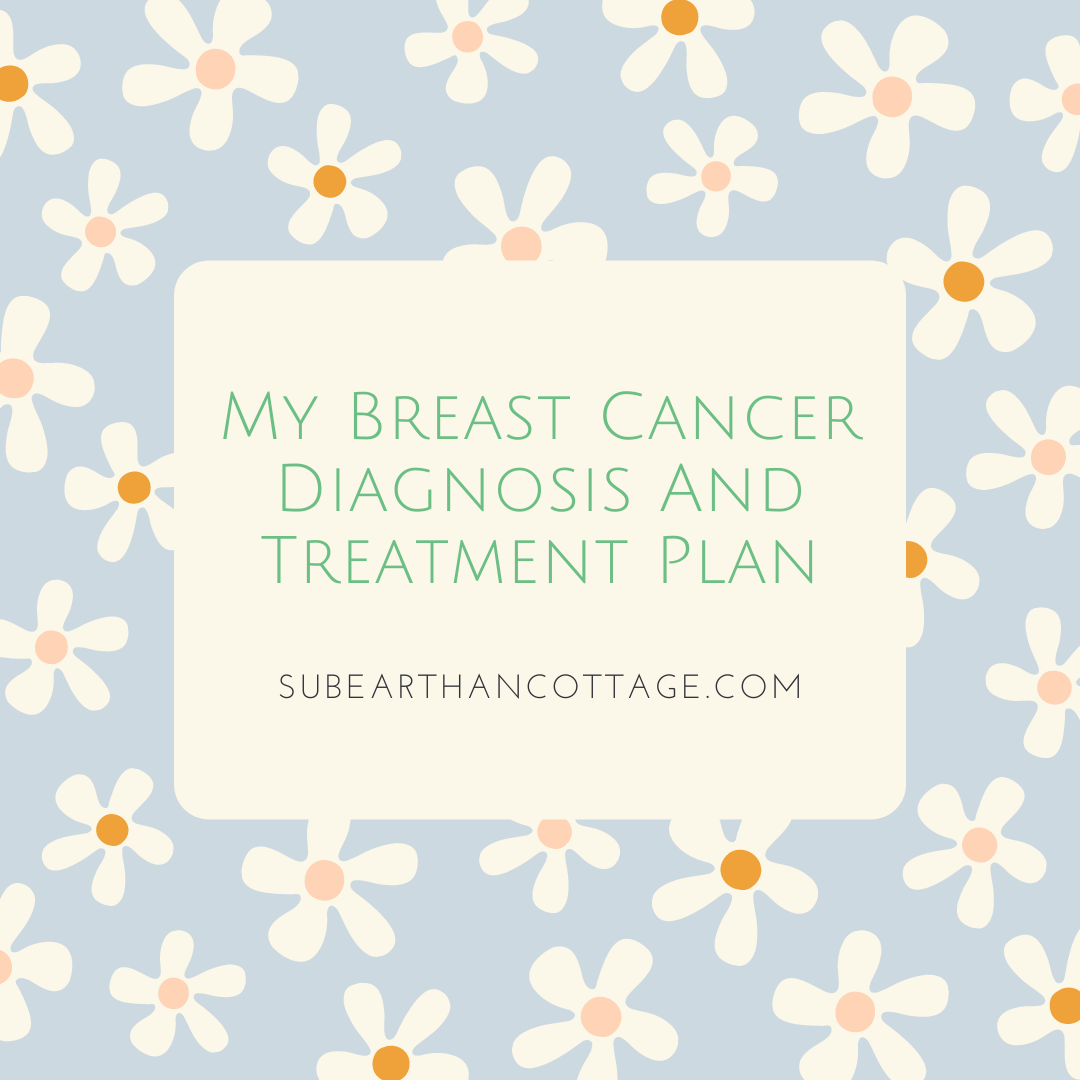 The title says it all, so if you want to skip the breast cancer talk and get back to the fun stuff, now’s your chance.

On November 1 of last year I had my first ever mammogram at age 41. The next day I found out I needed further testing and two weeks later I had a follow-up ultrasound and biopsy of two of three tumors and one of a few suspicious lymph nodes. From the appearance on the ultrasound, I was told they were about 95% likely to be cancer. On Monday of the following week (aka Thanksgiving week) it was official.

Breast cancer is classified both on location and whether it has receptors for estrogen(ER+ or -), progesterone (PR+ or -), and/or HER2 growth hormone (HER2+ or -). If it’s negative for all three hormone receptors, it’s called triple negative breast cancer. I have two types: invasive ductal carcinoma that is ER+ and HER2+ and invasive lobular carcinoma that is ER+ and HER2-. All are PR-. It is also stage 2, and grade 2. Stage describes the extent and is what most people are familiar hearing. Grade is how slow or fast it’s likely to spread. Grade 2 is not as slow as 1 but slower than 3.

Because I have a family history of breast cancer, I had genetic testing. I do not have any known genes for breast cancer, such as BRCA1 or BRCA2. It did show I have two variants. That just means that those genes are still being looked at for contributing to breast cancer. Most of the time variants get moved to the harmless category, so for now having them makes no impact on treatment or advice for other family members.

Because I’m complicated (ha!), it took some time and more test results for my oncologist to determine the best course of treatment. It also uncovered some weird activity in my left femur on a PET scan. Thankfully a bone biopsy came back negative for cancer, although we will still need to keep an eye on it. I also get to say I had someone drill into my bone while I was awake, which my weird self thinks is kind of cool. Not that I want to ever have to do it again, but since it happened I’m embracing the cool but slightly gross factor.

We knew that the best course was chemo followed by surgery, probably radiation and definitely a year of a targeted HER2 therapy called Herceptin. Which type of chemo was the question. Eventually, she decided on six rounds of TCHP for the chemotherapy, which is two chemotherapy drugs, Taxotere and Carboplatin, and two HER2 targeted therapies, the Herceptin I will continue and Perjeta.

For the chemo and Herceptin infusions, I have a port. That link gives more details on what that is. When I first heard that I would need one I was definitely grossed out by the thought of it, but now that I’ve seen how much easier it makes the infusions, I’m very glad to have it. I just can’t think about it too hard because it still makes me a little squeamish.

I receive chemo once every three weeks. So far I’ve had four rounds, so I’m over halfway done. Yes, I’m bald now, but it is about to be summer in Texas, so the timing isn’t too bad. As far as other symptoms, I mostly feel tired achy, like I have the flu for the first week, more easily tired the second week and almost normal the third week before it starts all over again.

I’ve actually been pleasantly surprised at how much easier it’s been than I was expecting. Part of that is probably the almost half a dozen anti-nausea meds they’ve given me. Between the two or three preemptive meds chemo week and the two as needed at home, my nausea is so well controlled I think I’ve managed to put on a few pounds.

I do have a few other side effects that are more a nuisance than anything. Heartburn is way worse than usual, and I occasionally get hot flashes. The most annoying thing is chemo mouth. Basically everything tastes weird at best, like I drank nail polish remover at worst. It does make it a little hard to drink water or find things to eat when it’s bad and so far I haven’t found one thing that consistently helps. It also seems like the things that taste the best then are some of the least healthy. Like Sonic Cheddar Peppers, for example. Probably explains the few extra pounds, tbh. I also can’t stomach coffee for about a week and a half after a treatment. I should probably cut it out the whole time, but no. Just no. (Currently sipping my second cup.)

I have another round coming up next week, my last one the first week of May and then surgery the second week of June. I’ll share more on the other parts of my treatment as they happen.