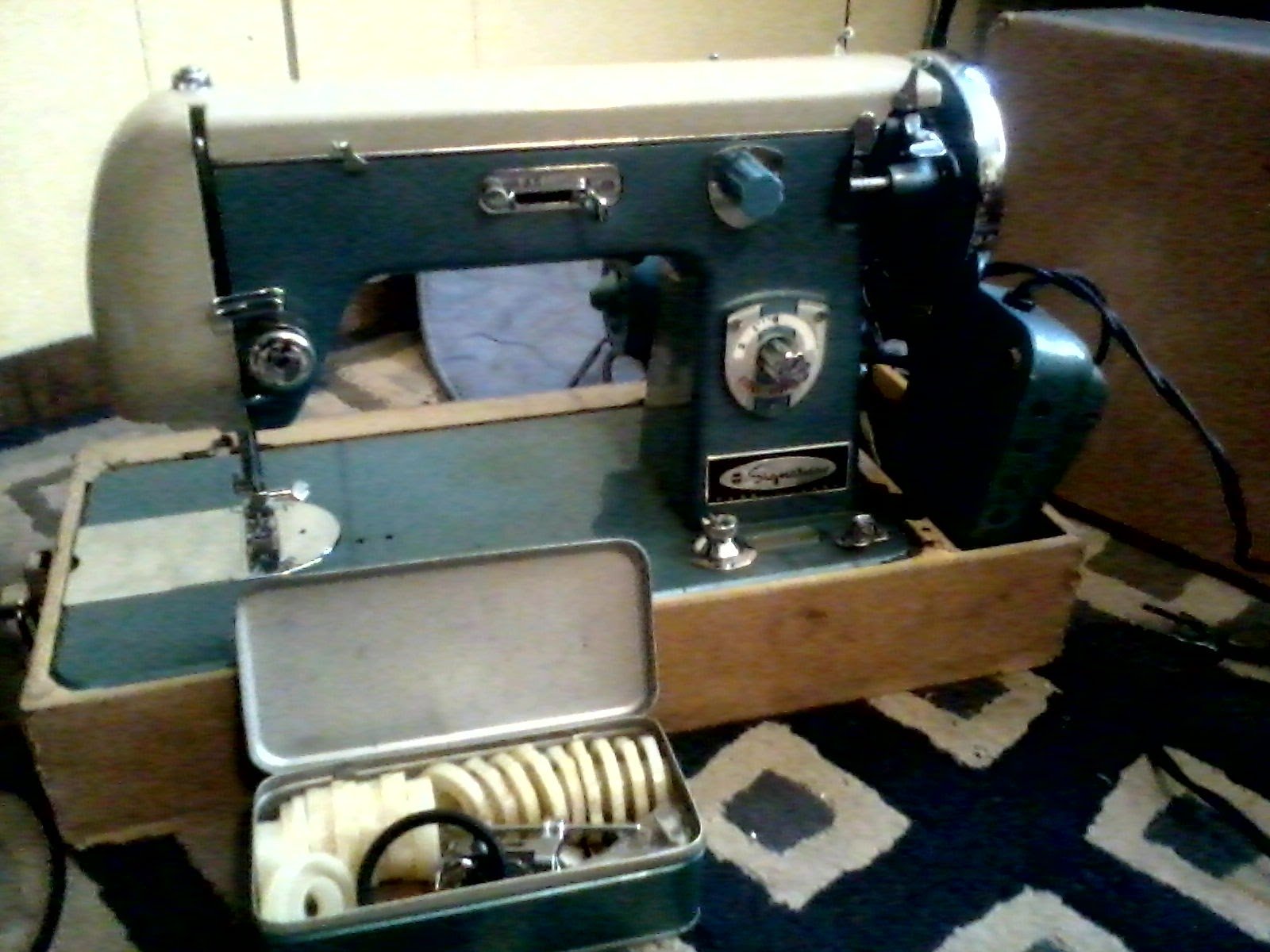 I’m a bit of a sewing machine hoarder. If you don’t count the one that is Finn’s, I have four sewing machines. That includes my sewing and embroidery machine combo, but not my two sergers. Also not including the knitting machine, because it knits.

While I’m certainly not an expert, I do have my preferences. I would take a well-built, old metal machine over a new machine any day. Mainly because when they break, I tend to do this:

The Signatures at that time were made by a Japanese company that specialized in industrial machines, I think for sewing feed sacks. That translates to a heavy duty, domestic sewing machine that will sew through anything. It also has a set of cams. Cams are interchangeable disks that allow it to sew pretty embroidery stitches.

My next sewing machine is another, slightly older Montgomery Ward’s Signature. This one was rescued from a lot of machines that were destined for the junk heap.

I love the blue color! It reminds me of cars from that era.

Like the other Signature, it uses cams. You can see them in the little accessory box. I actually like this one a little better than the other. It sews the prettiest straight stitch out of all my machines and has a cam that stitches a row of teeny tiny hearts!

I’ve never actually made anything on it, though. Unlike the other, this one is in a portable case, which is hilarious. I lift my 40+ pound four year old all the time and lifting that machine is still a struggle. Since I don’t have a dedicated place for it, I don’t have the motivation to lug it out.

My workhorse is a 90s model Kenmore, made by Janome. The case is plastic, but all the internal workings are metal. I know, because I’ve had to open it up a few times now to fix the hook timing. (Posts on that here and here.)

That is the best photo I could find of it not undergoing repairs. I love that machine because it isn’t as quirky as the Signatures. It also tells me how to thread it right on the machine, and when it comes to sewing machines, threading is half the battle.

My final machine is the Brother SE400 embroidery combo. I keep it set up as an embroidery machine because I have three other sewing machines. Also, it scares me, so I want to risk messing it up as little as possible. I haven’t had it opened up beyond the bobbin area, but I’m guessing there’s some plastic, and I know there are scary electronic components. With the other machines, I am freer to play because I know that if something happens, it’s not likely to be catastrophic. With this, something like a timing issue would definitely mean a big repair bill.

But, it makes pretty embroidery, has loads of decorative and utility stitches as a sewing machine, and has the most awesome needle threader I have ever seen. Seriously. Finn’s machine has a needle threader that I will never use, because it is complicated and I stabbed myself with it one time. Brother’s needle threader is like magic. It is especially handy when embroidering with multiple colors. Color changes take mere seconds.

Just to show I’m not as much of a hoarder as I could be, here is a photo of the White machine I couldn’t get working and sold on craigslist.

Then, while I was waiting for the buyers to show up, I decided to play with it a bit and figured out what was wrong. I hope they love it, or at least open it up to look at from time to time. Sigh. 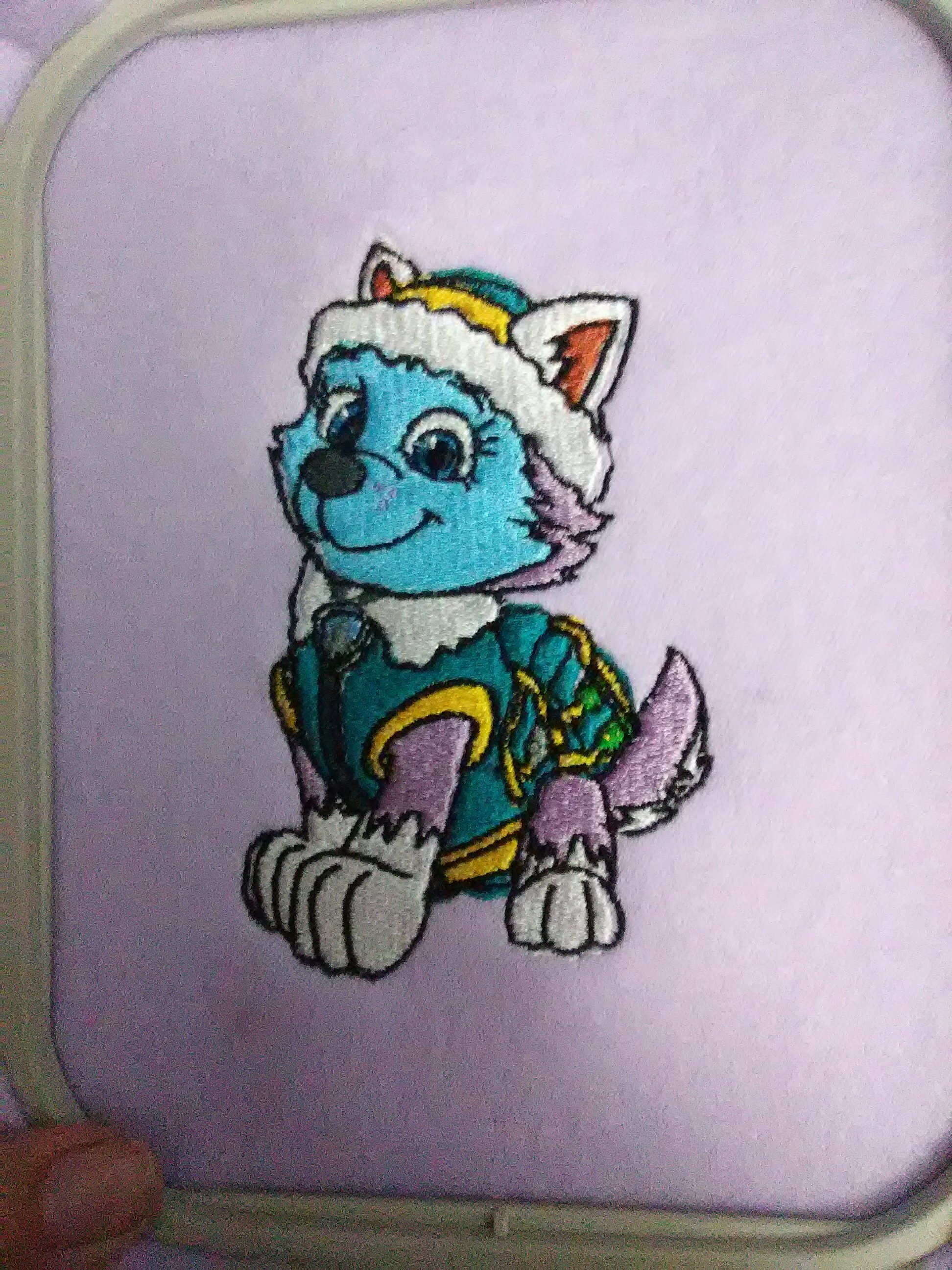 Thaddeus turns three next week! When asked what he wants for his birthday, he exclaims, “Paw Patrol stuuuuuufff!” He is also constantly asking me to sew basically the entire cast of Paw Patrol for him. I may be crafty, but that is a bit beyond my skill set. So, since I have a lovely embroidery machine that doesn’t get used nearly enough, I thought I’d purchase a Paw Patrol design set for my machine.

The set came from Etsy seller OhMyArtDesigns. It comes with all the main pups, Rider, Robo Dog, and the Paw Patrol Logo. They also come in a few different sizes and file types to accommodate different brands and machines. So far, I love the designs. The stitch density is great, and they have a lot of detail. The only problems I’ve had fall completely in the “user error” category.

My first mistake was using the thread colors displayed on the machine and my manual chart to choose my threads.

The thread colors and names used by different machine brands varies, so if a design is drafted using different colors than yours, the color suggestions can seem a bit off. I was in a hurry and didn’t pay attention to the color chart provided by the designer, so some of my color choices weren’t quite right.

Everest would be less blue if I had used the appropriate chart. Lesson learned. This also highlights the need to test run any new patterns before stitching them on your final product. Embroidery machine stitching is so dense that it’s almost impossible to remove without ruining the fabric.

The other problem I encountered is also easily fixed. I just need to learn how to hoop my fabric properly. If you look closely, you can see the black outline on both Everest and Rider strays from the edge of the design on one side. I still have trouble getting the fabric and stabilizer drum-taut, so by the time the outline is stitched, the design stitches puckered the fabric in places. I have a magnetic hoop set on my wish list to see if that would help, but honestly it’s probably a case of needing more practice. Considering how many pups I have left to stitch, I may be an expert at hooping by the end of the week!

It is so fun to watch the designs being sewn. It’s like putting together a puzzle.

Looking for new designs to try on your embroidery machine? Find my embroidery files and freebies here.

To stay informed about new posts, products and sales, sign up for my newsletter here.

So, I got a new toy for my birthday:

Yay! Now impatient me with no time and a fear of leaving needles around accidentally in the baby’s reach can do embroidery too! It’s also a regular sewing machine. I’ve never sewn on a computerized machine before. I’ve never sewn on a sewing machine newer than from the early 1990s for that matter. Most sewing machines I’ve used have been older than me. Not that I don’t like old machines. You’ll have to pry my trusty metal mechanical Kenmore and back up Signature(s) from my cold hands.

It’s a brother se400. I haven’t done much regular sewing with it yet, so I can’t do a full review. I can say that I worried a little about getting annoyed with all the threading and re-threading involved with a single needle embroidery machine. Brother took care of that by giving it the most amazing needle threader I’ve ever seen. I usually skip “automatic” threaders as I find them harder to use than just sticking the thread through the eye by hand. This one is some sort of magic. Seriously, if you were to stop over, I’d probably briefly introduce you to my family and then insist you come see me thread my sewing machine.

Aside from just playing, I’ve rescued a few shirts from (probably coffee) stains by embroidering things on them to hide the stains. Considering my clumsiness and love of coffee, that alone will probably help me get my money’s worth out of it.

I am looking for decent digitizing software so I can do things like embroider the SubEarthan Cottage logo and make traditional monograms a little easier. Embird seems to be the go-to, but it’s a little pricey. Stitch Era is more my price range, but I’m not sure it’s as user-friendly. I’ve also seen Sew What Pro mentioned, but haven’t looked into it enough to know what it’s like. Any advice on software would be appreciated.