With freezing temperatures and possible snow in the forecast, it seemed like the perfect time to revisit this delicious sausage potato soup recipe.

I love the slightly spicy, creamy Zuppa Toscana soup from Olive Garden. Since going gluten-free and dairy-free, Zuppa Toscana and pretty much anything Olive Garden are out of the question. With the cold weather, though, I really crave soups. I made some potato soup a few days ago that was yummy, but just not the same. Today I realized I happened to have everything I needed to attempt a sausage and potato soup very much like Zuppa Toscana.

It doesn’t have quite the same creaminess due to substituting almond milk. Cashew milk is a creamier substitute, but I didn’t have any on hand. For a first dairy-free attempt, it turned out pretty darn close.

Please leave a comment if you try this and let me know how it turns out. If any of my instructions need clarification, don’t hesitate to ask in the comments, too.

For more electric pressure cooker recipes and tips, click here. To stay up to date on SubEarthan Cottage happenings, please sign up for my newsletter. 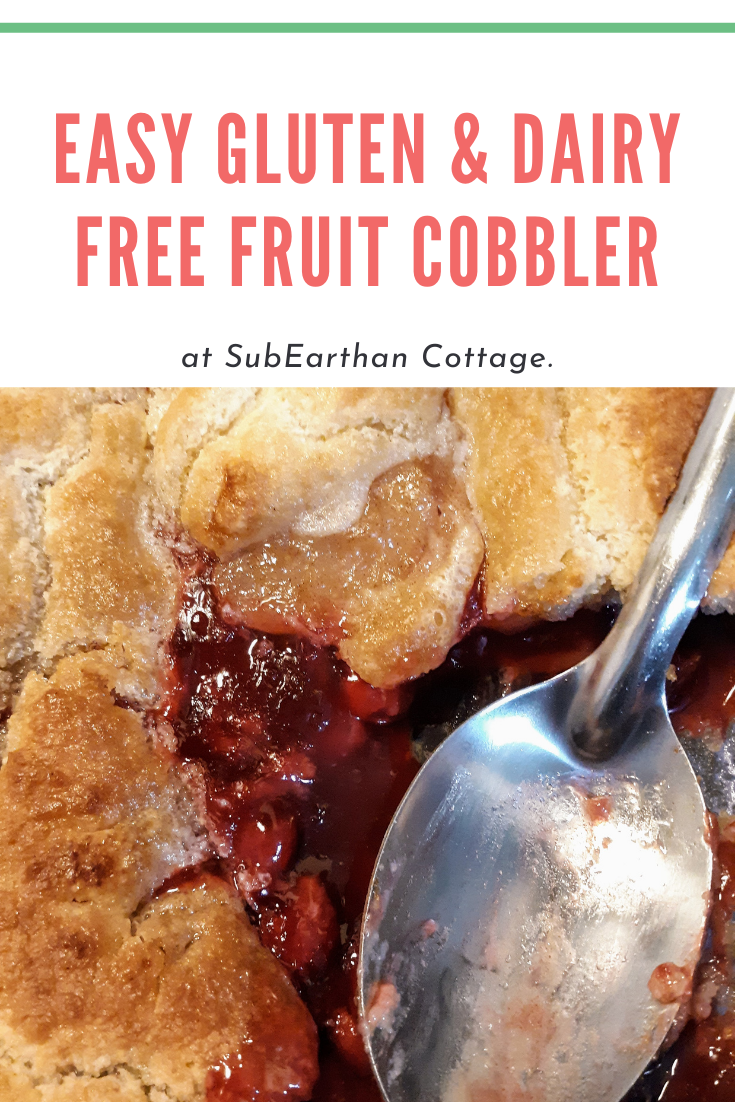 This fruit cobbler is easy to make and uses mostly pantry staples. From start to finish, you’ll have a delicious cobbler in under an hour. If you aren’t gluten or dairy free, I’ve included the ingredients for that, too!

Bob’s Red Mill 1 to 1 Gluten Free flour blend* is my favorite for baking, but I’ve used others with success, too. If you use a blend that doesn’t have xanthan gum or something similar, I do recommend adding probably about 1/4 of a teaspoon of xanthan gum as well.

The assembly and not stirring part seems a little weird, but trust the process. My oven runs hot, so I start checking it after about 40 minutes. Sometimes different flour blends can make a difference, too, so the first time you make it, I recommend checking it early. When the top is golden and just starting to brown around the edges, it’s done. Enjoy!

This fruit cobbler is easy to make and uses mostly pantry staples. From start to finish, you'll have a delicious cobbler in under an hour. If you aren't gluten or dairy free, I've included the ingredients for that, too!
Prep Time5 mins
Cook Time50 mins
Course: Dessert
Keyword: dairy free, easy, egg free, gluten free, simple, vegan
Servings: 6 servings

The assembly and not stirring part seems a little weird, but trust the process. My oven runs hot, so I start checking it after about 40 minutes. Sometimes different flour blends can make a difference, too, so the first time you make it, I recommend checking it early. When the top is golden and just starting to brown around the edges, it’s done. Enjoy!

*Note: If you make a purchase through this Amazon link, I will receive a small commission. It doesn’t change the cost to you. 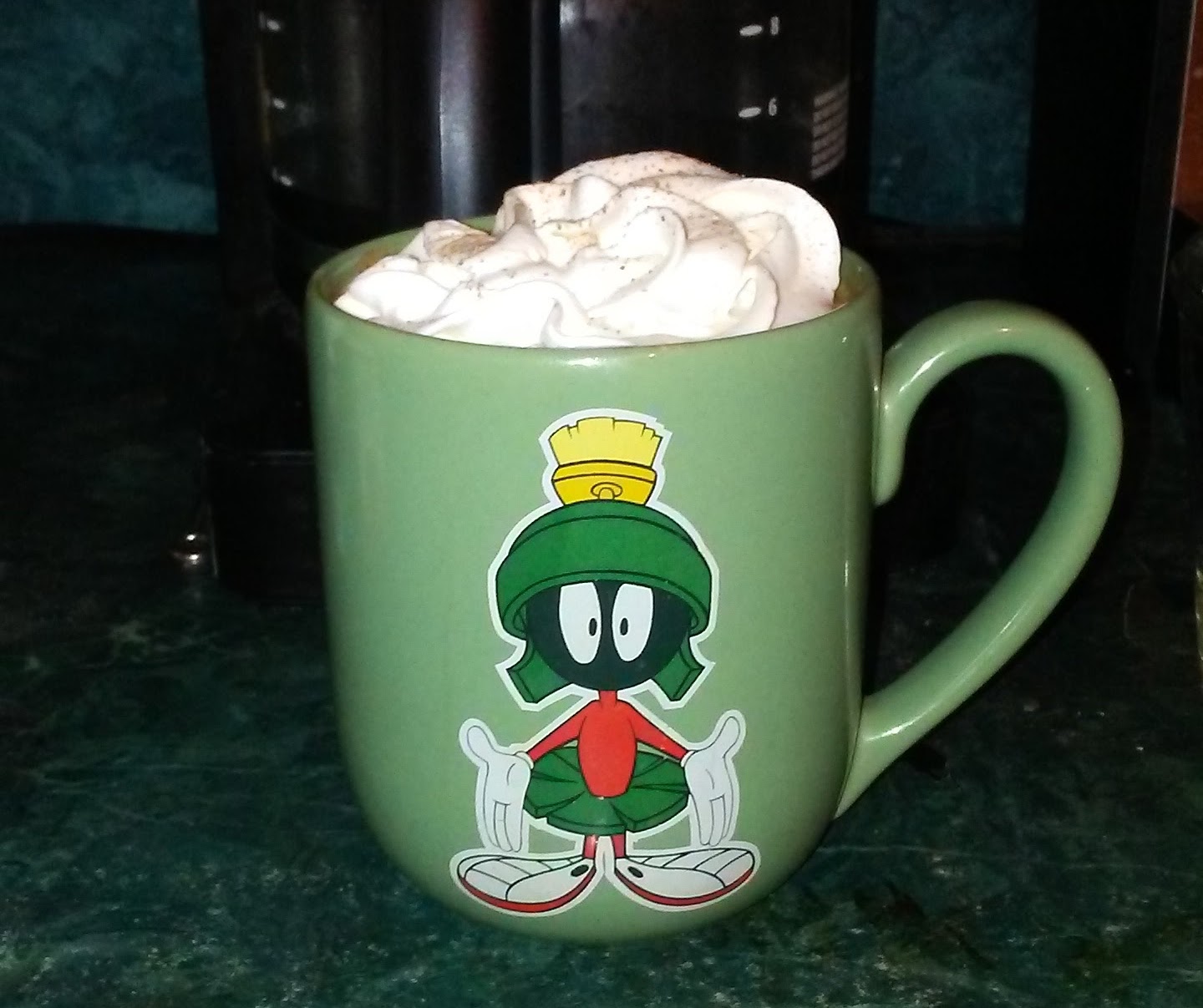 Ready for all things pumpkin? Here’s my favorite recipe to make a pumpkin spice latte. Make it with tea, coffee or milk in a smoothie for a healthy, frugal way to enjoy pumpkin spice at home.

Blend all ingredients together. Top with whipped cream and a dash of nutmeg. Enjoy. Repeat. 🙂

I’ve also used this basic recipe to make a pumpkin spice smoothie. All you do is swap out the coffee for the milk of your choice and add a frozen banana or a fresh banana and some ice. While it’s healthy as is, I also like to add an extra spoonful of pumpkin to up the vitamin content, as well as some chia or flax seeds. You could easily leave those out, though.

I’ve also used this basic recipe to make a pumpkin spice smoothie. Just swap the coffee or tea for the milk of your choice and add a frozen banana or fresh banana and ice. Blend thoroughly.  While it’s healthy as-is, I like to add an extra spoonful of pumpkin to up the vitamin content, as well as some chia or flax seeds. You can easily leave those out, though.

Have a happy Pumpkin season! 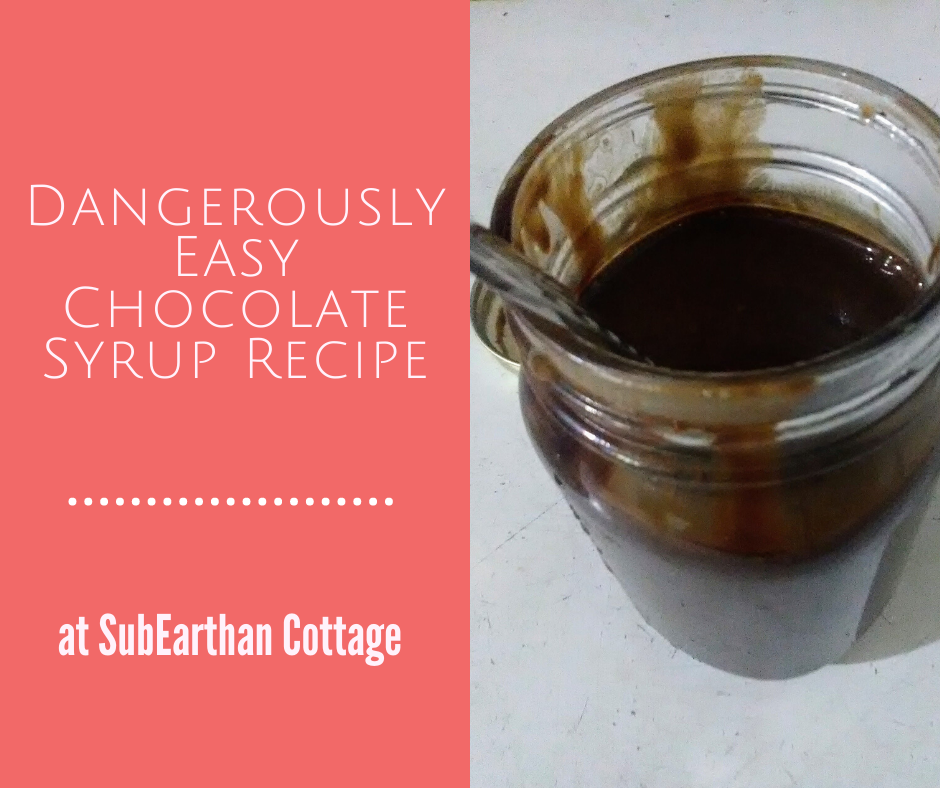 Chocolate syrup is deliciously versatile. Stir it in hot or cold milk or coffee for a treat or pour over ice cream to make it even more decadent. Then there’s old fashioned sodas and baked goods made with chocolate syrup. With this chocolate syrup recipe, you can make delicious chocolate syrup with just a few basic pantry staples whenever you need it.

Sure, it’s easy to pick up a bottle from the supermarket, but with this easy chocolate syrup recipe, you can make it for a fraction of the cost and without a trip to the store. By making it, you also have control over the ingredients. Use your favorite cocoa powder, experiment with the type and amount of sugar or swap out the vanilla extract for something a little more creative to make it your own. I can totally see using peppermint extract to mimic the flavor of Andes mints. Or, if you’re a fan of Terry’s Chocolate Orange chocolates, add orange extract.

Like most of my recipes, this chocolate syrup is gluten free and dairy free.

This chocolate syrup recipe is so easy and delicious. With only a few pantry-staple ingredients needed, you'll never have an excuse not to make it. Should be good for at least a month when stored properly. I usually find plenty of ways to use it up before then.
Prep Time2 mins
Cook Time5 mins
Course: Dessert

The vanilla extract and salt amount can be adjusted according to taste. I can also see swapping out the vanilla for peppermint or orange extract.

While I try to write recipes as clearly as possible, it’s easy to miss a step or make assumptions. If anything is confusing, please don’t hesitate to comment with your questions. If you make this recipe, please let me know what you think.

This post contains affiliate links. If you click through any of the Amazon links and make a purchase, I will receive a small commission. There is no added cost to you. 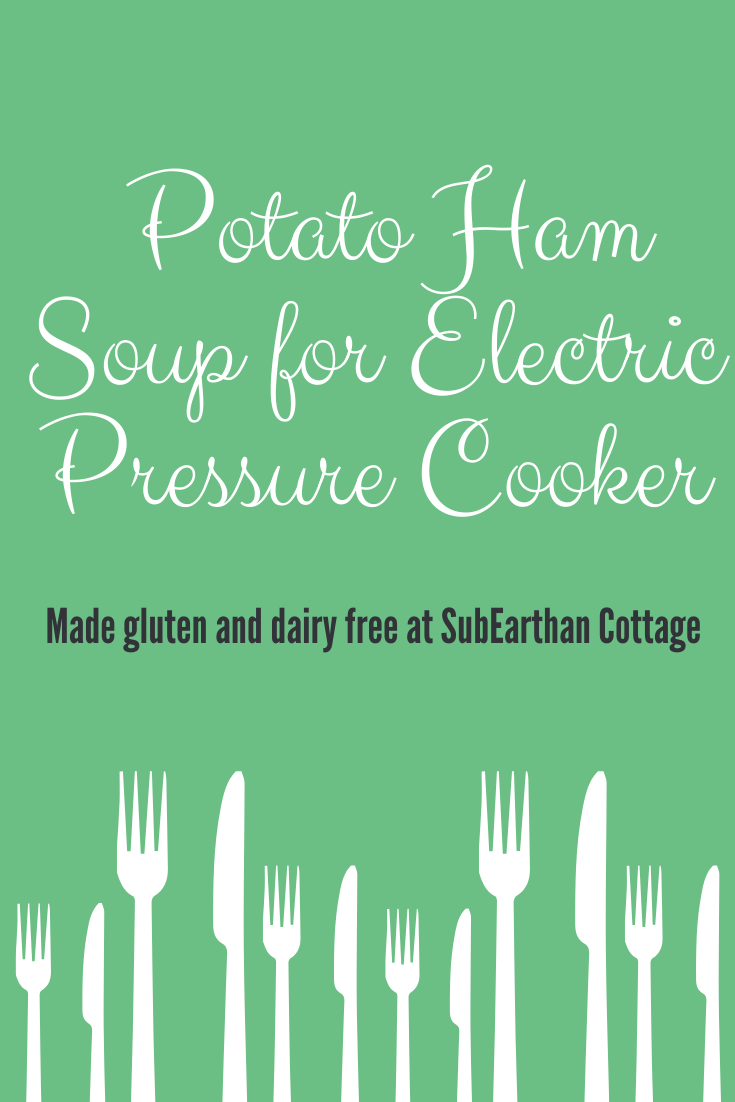 In my Tips to Save Money on Food post, I mention buying ham on sale after the holidays. I love cooking a ham at the beginning of the week. It provides sliced ham for a few meals. Then I cook a pot of red beans or pinto beans with what’s left of the meat and the ham bone for lots of flavor and richness.

Sometimes that gets boring, though. After cooking a ham on Sunday, I wanted something to use some of the ham that was different but easy. I also needed something that used ingredients I already had on hand. A quick internet search found this delicious Potato Ham Soup shared by Sandy at Simply Happy Foodie. It’s written for one of my favorite appliances, the electric pressure cooker, and uses basic ingredients that are common kitchen staples.

Since this isn’t my recipe, I’m linking to the original at Simply Happy Foodie. I made a few changes to the original to make it gluten and dairy free. I also had to make a few adjustments to make it work with what I had on hand. Those I will share here.

That’s it. This soup is a great way to use up leftover ham. With an electric pressure cooker it’s done in under an hour, start to finish. Check it out at Simply Happy Foodie, and if you need a gluten-free or dairy-free option, use the adjustments I’ve shared here.

Clearing out to make room for new products. Everything listed here is at least 50% off the original price. If you see something you like, get it now before it sells out. 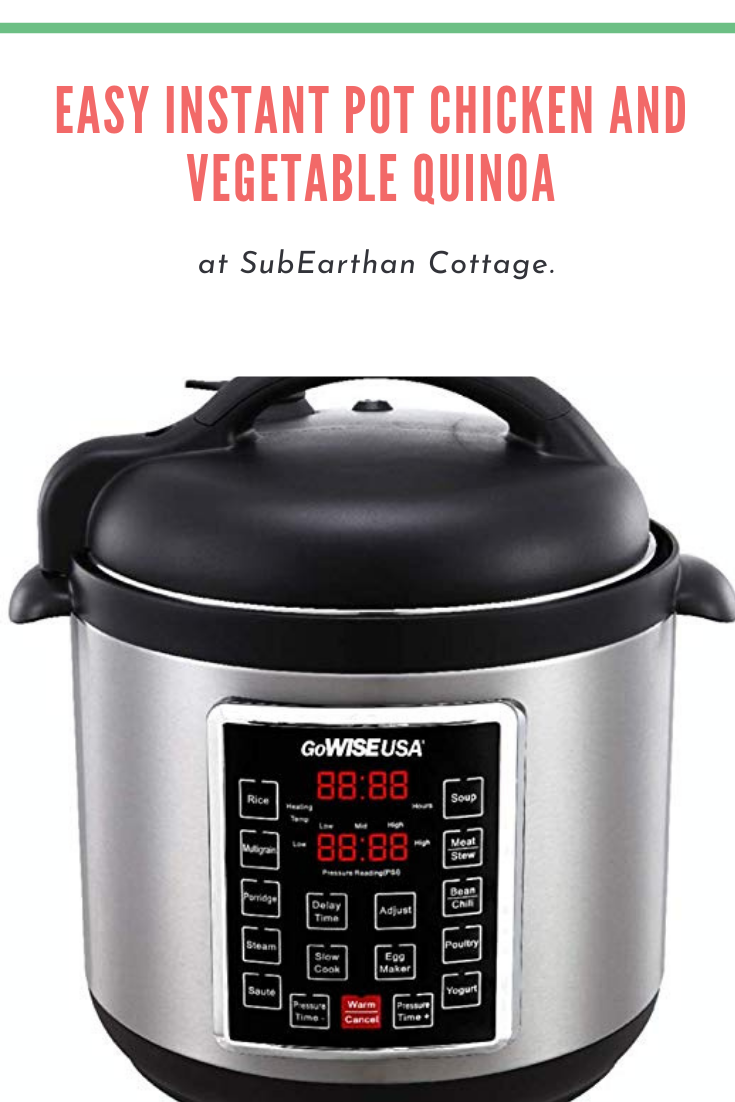 Just because you might be at home more doesn’t mean you have more time to cook. Whether you’re working from home, helping virtual learners or homeschooling, it’s likely you’re just as busy as ever. I love using my electric pressure cooker for busy days. It’s like having someone cooking in the kitchen while I work on the million of other things needing done.

One of my favorite fast recipes is chicken and vegetable quinoa. It takes minutes to prepare, is super healthy and cooks fast, so it’s perfect for busy days. The basic recipe is really easy to customize, so it’s a good meal to use up odds and ends from the fridge.

It’s easy to pack for lunches or take on picnics, too.

Instant Pot Chicken and Vegetable Quinoa is a quick, last minute dish that is great hot or cold. Customize it by swapping out the protein or vegetables depending on what you have on hand.
Prep Time15 mins
Cook Time1 min
Course: Main Course, Side Dish
Servings: 6 people
Author: Charity

The great thing about this recipe is it is easy to customize. Try it with beef, sausage, tofu, or skip the protein and add more vegetables. If you have leftover chicken, shred it and use it instead of raw chicken breasts. Clean out the veggie drawer and use whatever you have on hand. Change up the flavor by adding soy sauce, hot sauce or your favorite seasonings. It’s easy to pack for lunches or take on picnics, too.

My machine embroidery files are also on sale all month for just $1 each! Be sure to check out my latest Halloween designs. Shop embroidery designs here. 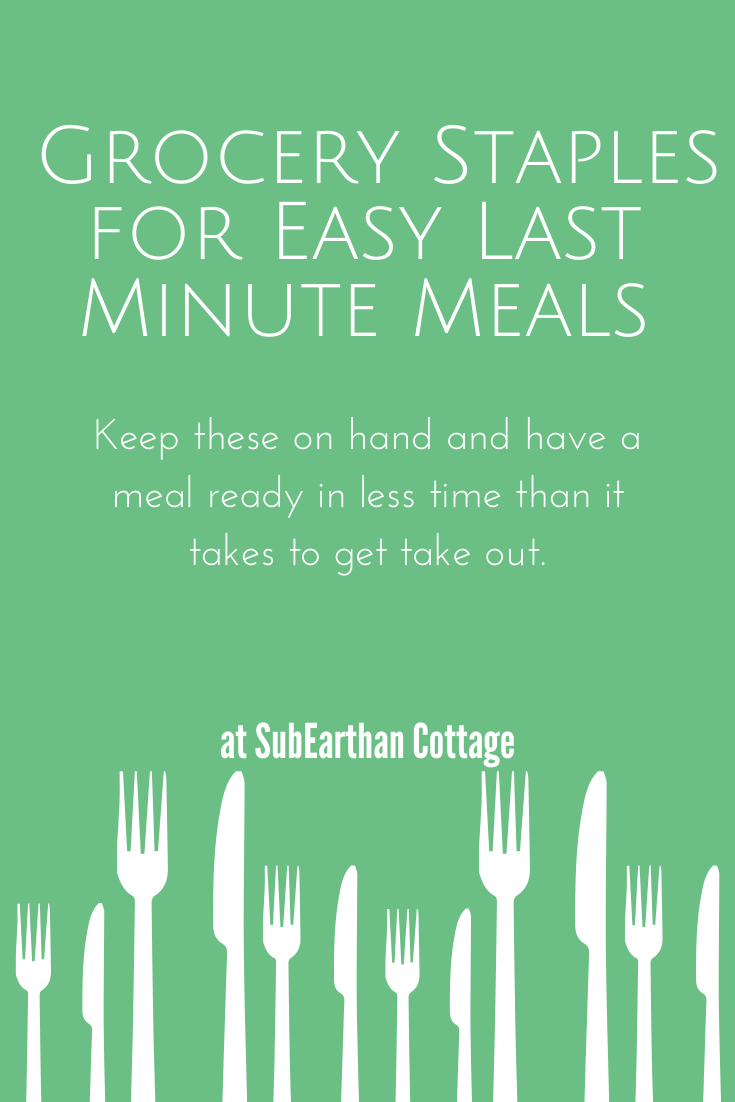 Even the best meal planners have days where things don’t go according to plan. Fast food is convenient, but usually more expensive and less healthy than what you can make at home. If you have any dietary restrictions, eating out safely can be extra challenging. For those nights, I like to keep a few staples on hand that make it easy to make a last minute meal that’s healthy and frugal.

Here’s my list of grocery staples I like to keep on hand for last minute meals, along with ideas for how to use them. Depending on your tastes, you may not find everything I use helpful. Since we eat gluten and dairy free, my list doesn’t include common staples like bread or cheese.

I’ve provided a few specific recipes above. Really, though, as long as I have one or two things from each category handy, I can combine them to come up with delicious last minute meals. Here’s a few more of my go-to combinations:

What are some of your favorite last minute meals? I’d love for you to share them in the comments.